In a historical vote on Thursday, 16th of June, the Comission of Foreign Affairs, Transparency and Cooperation of the Catalan Parliament approved a resolution during parliamentary session declaring that Israel is committing the crime of apartheid 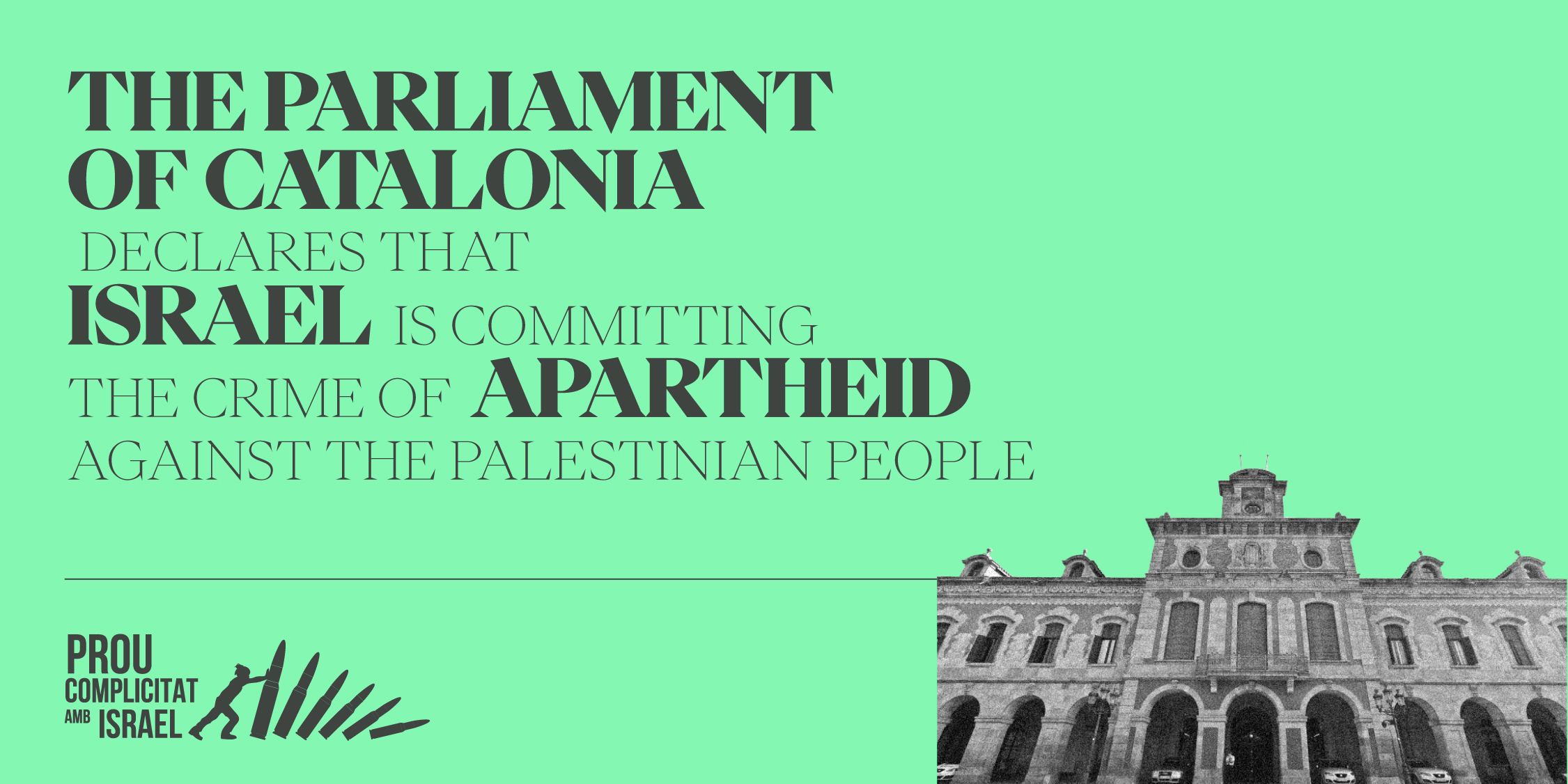 The resolution was supported by the following political parties: the Candidatura d’Unitat Popular, En Comú Podem, Esquerra Republicana de Catalunya and the Partit Socialista de Catalunya. With this approval, the Catalan Parliament becomes the first one in Europe to publicly recognise that Israel commits the crime of apartheid against the Palestinian people.

The resolution affirms that “the system applied by Israel in the Occupied [Palestinian] Territories is contrary to international law and is equivalent to the crime of apartheid as defined in the Rome Statute of the International Criminal Court, Article 7.2 (h).”

The reactions to such a historical have come fast. The Coalition Stop Complicity with Israel, made up of 16 Catalan civil society organizations and the driving force behind the resolution, has acknowledged through its spokesperson Alys Samson that “it is very good news that four political parties in Catalonia are saying what the Palestinian people have been saying for decades which is that Israel commits the crime of apartheid”, adding that it “demonstrates the growing international consensus that Israel’s impunity must end.”

Luca Gervasoni, president of Lafede.cat, a Catalan entity made up of more than 125 organizations working for Global Justice, stated that “the approved text will be a very important tool to demand coherence from the Catalan Government’s policies. It is time to apply to Israel the same measures that ended Apartheid in South Africa. The Generalitat (Catalan Government) must suspend institutional, trade and cultural agreements with Israeli institutions.“

The approved resolution states that “it commits to and asks the Government of the Generalitat de Catalunya not to support or provide help or assistance to maintain this situation. That is, to use all possible political and diplomatic tools, within the scope of their competences, to ensure that the Israeli authorities implement the recommendations made in the Amnesty International and Human Rights Watch reports.”

It adds “it will ensure that human rights are at the heart of all bilateral and multilateral agreements with the Israeli authorities, with due diligence to ensure that they do not contribute to maintaining an apartheid-like system.”

The resolution was registered on March 21 as part of the Israeli Apartheid Week organized by the Coalition Stop Complicity with Israel. This week’s main event was an appearance in the Parliament of Catalonia by Bruno Stagno, director of advocacy for Human Rights Watch, and Esteban Beltran, director of Amnesty International in Spain, to present the conclusions of the reports that each of these organizations had elaborated on the situation in Palestine.

On that occasion, they both agreed that the Israeli authorities had set up a legal system of cruelty aimed at discriminating against the Palestinian people, which is a crime of apartheid because it was based on ethnic and racial origin.

Bruno Stagno commented on the approval of the motion: “The passage of this motion by the Catalan Parliament adds to the chorus of voices that have recognized the reality of apartheid and persecution for millions of Palestinians and a critical step to ending complicity in these crimes against humanity committed by Israeli authorities. The Spanish parliament, and parliaments throughout Europe and the world, should follow suit. Correctly diagnosing a problem is the first step to solving it. Dismantling apartheid is vital to the future of Palestinians and Israelis and the cause of peace.”

Esteban Beltrán, director of the Spanish section of Amnesty International, declared: “There is no possible justification for a system built around the institutionalized and prolonged racist oppression of millions of people. Apartheid has no place in our world, and states that decide to make concessions to Israel will find themselves on the wrong side of history. The approval of this resolution in the Parliament of Catalonia, recognizing this situation as apartheid, is one more step on the road towards action to dismantle it”.

Both organizations urge states and businesses, following the recommendations of these reports, to review their institutional and trade agreements to ensure that they do not support apartheid and persecution and do not commit crimes against humanity.